The Birth of Venus

It is cognate with the Latin venia (“favour, permission”) through to common PIE root *wenh₁– (“to strive for, wish for, desire, love”). The Latin verb venerārī (“to honour, worship, pay homage”) is a derivative of Venus.

Venus is the planet of the third circle, counting away from the Earth, between Mercury and the Sun.

Venus has a special place in the sun’s family of planets.

It is the solar system’s most inhospitable world. Its surface temperature, around 460C, would melt lead and sear a human to death in seconds while his or her remains were crushed to pulp by an atmosphere 92 times denser than Earth’s.

The Upper Palaeolithic also called the Late Stone Age is the third and last subdivision of the Palaeolithic or Old Stone Age. Very broadly, it dates to between 50,000 and 12,000 years ago.

The Palaeolithic era is when humans first invented stone tools.

The first images of the human body from the European Upper Palaeolithic, primarily three-dimensional, palm-sized female statuettes often referred to as Venus figurines.

Though little consensus exists about why the figures were created or what purposes they served, they have generally been interpreted as sex objects made from a male point of view.’

This view assumes women were passive spectators of the creative mental life of prehistory, their bodies relevant only as representative of male concerns and interests.

A more recent theory has emerged to the statues for creation and purpose: the figurines began as a form of self-representation by women as seen looking down her body.

The oldest Lunar calendars and earliest constellations have been identified in cave art found in France and Germany, which tells us that the people at the time understood mathematical sets, and the interplay between the moon annual cycle, ecliptic, solstice and seasonal changes on earth.

Inanna is an ancient Mesopotamian goddess associated with love, beauty, sex, war, justice and political power. Inanna was worshipped in Sumer at least as early as the 4000 BC – c. 3100. She was later worshipped by the Akkadians, Babylonians, and Assyrians under the name Ishtar.

There is also evidence that Inanna was a worshipped deity of Armenians of Hayasa-Azzi. She was known as the “Queen of Heaven” and was the patron goddess of the Eanna temple at the city of Uruk, which was her main cult center.

Inanna was associated with the planet Venus and her most prominent symbols included the lion and the eight-pointed star. Her husband was the god Dumuzid (later known as Tammuz) and her sukkal, or personal attendant, was the goddess Ninshubur.

Ancient Akkadian cylinder seal depicting Inanna resting her foot on the back of a lion while Ninshubur stands in front of her paying obeisance. 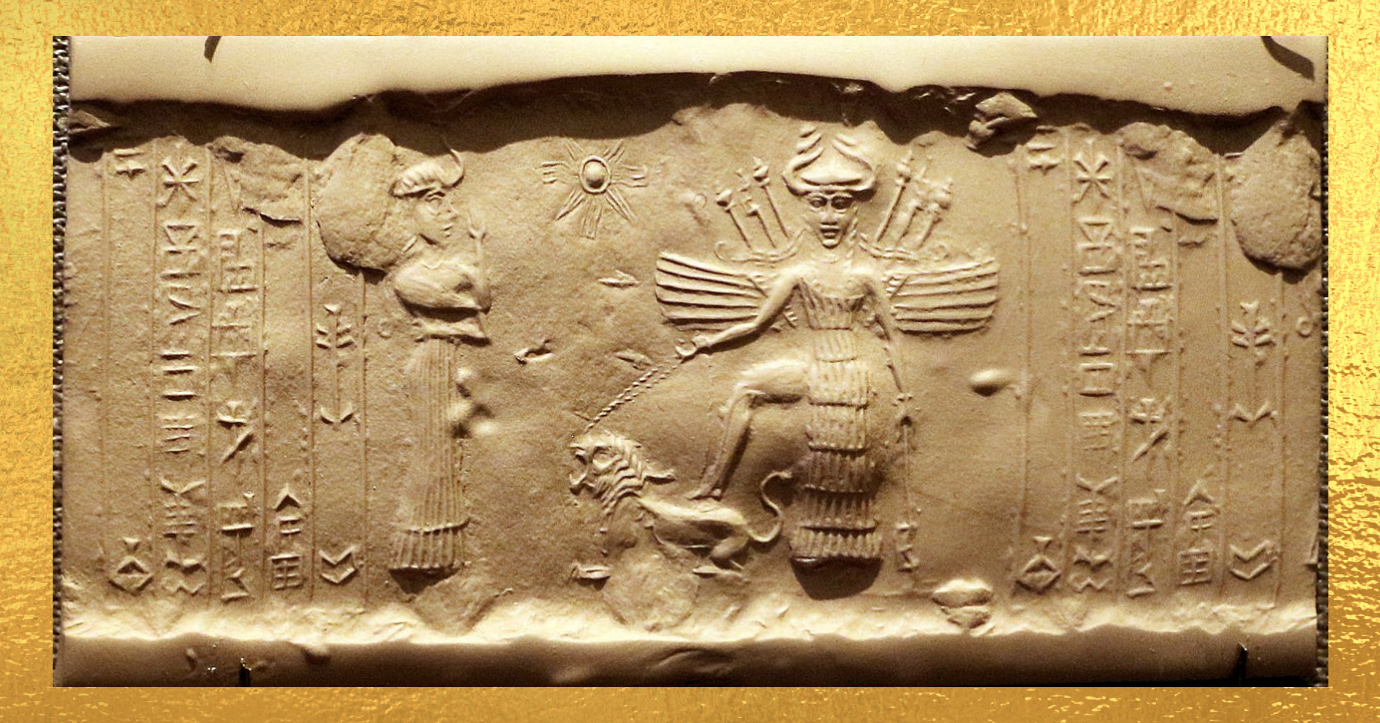 Depiction of Inanna/Ishtar from the Ishtar Vase, dating to the early second millennium BC.

The Neolithic period is the final division of the Stone Age, with a wide-ranging set of developments that appear to have arisen independently in several parts of the world.

It is first seen about 12,000 years ago and is known as the era when humans started farming. 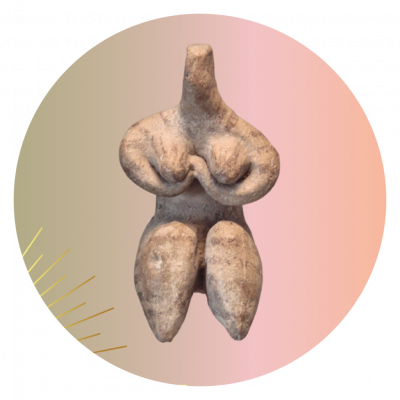 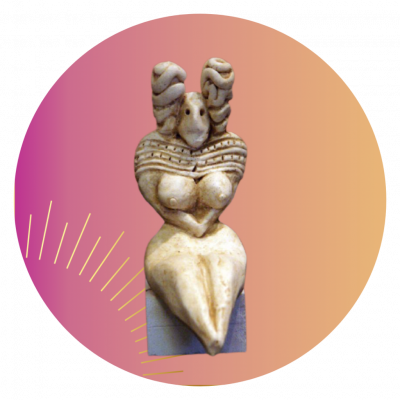 Patriarchy as “a system of social structures and practices in which men dominate, oppress, and exploit women” emerges. Social stratification along gender lines, in which power is predominantly held by men, has been observed in most societies since then. 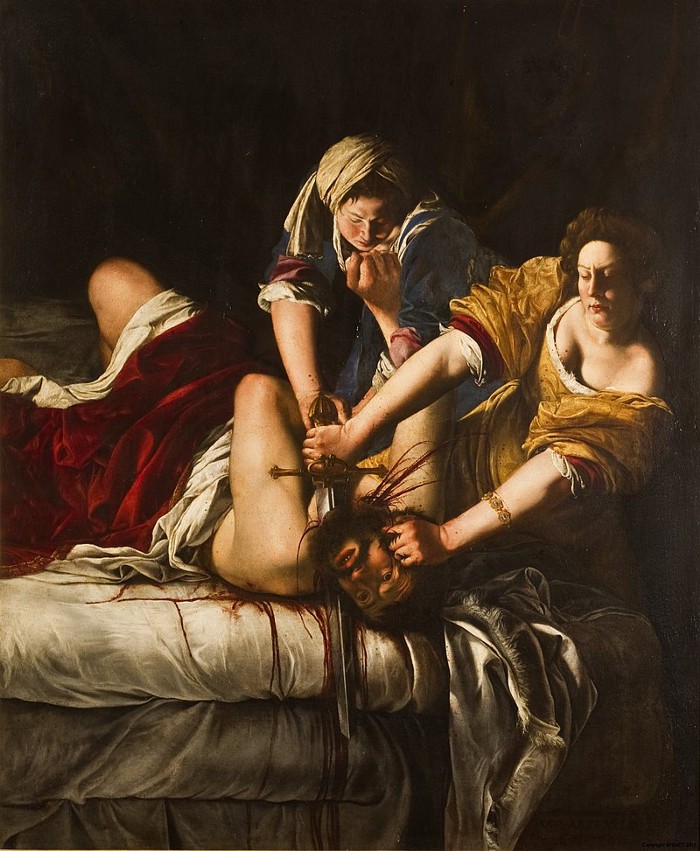 Artemisia Gentileschi was born in Rome on July 8th, 1593 with Sun in Cancer and Moon in Scorpio. ☀️♋️🌓♏️

She was the daughter of renowned artist, Orazio Gentileschi.

Artemisia received no academic education and was functionally illiterate until her twenties, when she finally had the opportunity to learn to read and write. She would become the first woman member of Florentine Accademia del Design.

In 1611, the artist Agostino Tassi, and friend of her father’s raped Artemisia. A gruelling public trial followed. At the end of the trial Tassi was found guilty and imprisoned for two years. His verdict was later annulled and he was at liberty in 1613.

Between 1612-1613, Artemisia painted ‘Judith Slaying Holofernes’, now on display in the Museo e Real Bosco di Capodimonte in Naples, Italy. She died in Naples in 1653.

The Venus tablet of Ammisaduqa refers to the record of astronomical observations of Venus, as preserved in numerous cuneiform tablets dating from the first millennium BC.

It is believed that this astronomical record was first compiled during the reign of King Ammisaduqa, the fourth ruler after Hammurabi.

Thus, the origins of this text should probably be dated to around the mid-seventeenth century BC.

The tablet recorded the rise times of Venus and its first and last visibility on the horizon before or after sunrise and sunset in the form of lunar dates. These observations are recorded for a period of 21 years. 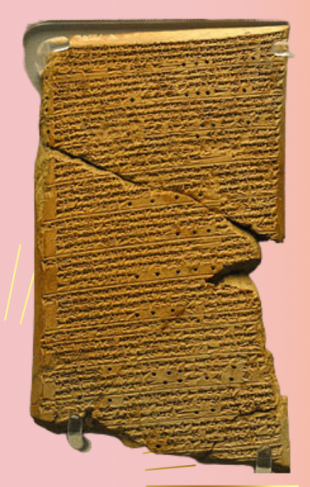 The most important Roman deity in Pompeii was Venus, the goddess of love and beauty, and her temple, raised high on an artificial platform next to the Porta Marina (“Marine Gate”), was the city’s largest sacred site.

A medallion painting from the House of Marcus Fabius Rufus in Pompeii, depicting the Greco-Roman goddess Venus-Aphrodite wearing a diadem and holding a scepter. 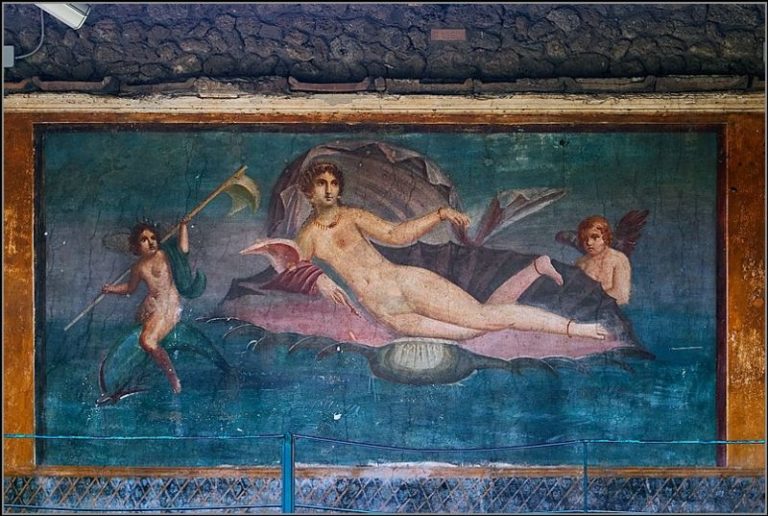 Dedication of the First Known Temple to Venus

The first known temple to Venus was vowed to Venus Obsequens (“Indulgent Venus by Q. Fabius Gurges in the heat of a battle against the Samnites.

It was dedicated in 295 BC, at a site near the Aventine Hill, and was supposedly funded by fines imposed on Roman women for sexual misdemeanours.

Its rites and character were probably influenced by or based on Greek Aphrodite’s cults, which were already diffused in various forms throughout Italian Magna Graeca. Its dedication date connects Venus Obsequens to the Vinalia rustica festival.

Items found inside the Temple include a statue of Venus by Arcesilas as well as statues of Julius Caesar. Numerous Greek paintings by Timomachus of Ajax and Medea, six collections of engraved gems, a breastplate decorated with pearls from Britannia, and a controversial golden statue of Cleopatra as the goddess Isis once filled the Temple.

The Temple was styled in Corinthian order. This included carved mouldings, capitals, and entablature. One of the mouldings, the cyma moulding, has carved dolphins, shells, and tridents.

These particular symbols refer to Venus and the sea. A 2nd or 3rd-century bronze figurine of Venus.

Fresco with a seated Venus, restored as a personification of Rome in the so-called “Dea Barberini” Roman artwork, dated first half of the 4th century AD, from a room near the Baptistery of San Giovanni in Laterano.

For a thousand years this monumental cathedral was the most important church in Christendom.

Commissioned by the emperor Constantine and consecrated in AD 324, it was the first Christian basilica built in Rome and, until the late 14th century, was the pope’s main place of worship. 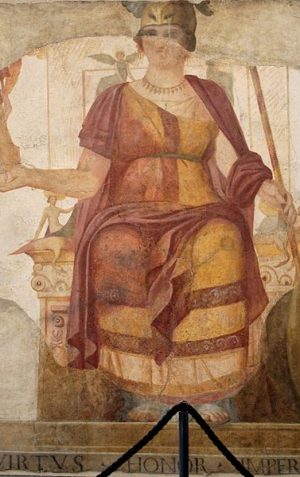 Sculpted sometime between 150 and 125 BC, the statue is now widely agreed to be the work of Alexandros of Antioch.

The statue is believed to depict Aphrodite, the Greek goddess of love and beauty, and it bears the name of Venus, the Roman counterpart of Aphrodite.

Some have suggested the sculpture is not Aphrodite/Venus, but Amphitrite, the sea goddess who was particularly adored on Milos.

Still others have proposed she’s Victory, or perhaps a prostitute. With her arms long missing, would-be context clues have been lost for centuries. A spear could have meant one thing, a spool of thread another.

If she held an apple—as some reports claim—it could mean she was Aphrodite, holding the award given to her by Paris before the Trojan War began.

The Venus de Milo entered the Louvre in 1821, where her location is in the Galerie des Antiques. (Remember to come back here)

The Gregorian calendar is introduced by Pope Gregory as a minor modification of the Julian calendar, reducing the average year from 365.25 days to 365.2425 days.

The modification allowed for the drift in the ‘tropical’ or ‘solar’ year that the inaccuracy had caused during the intervening centuries. 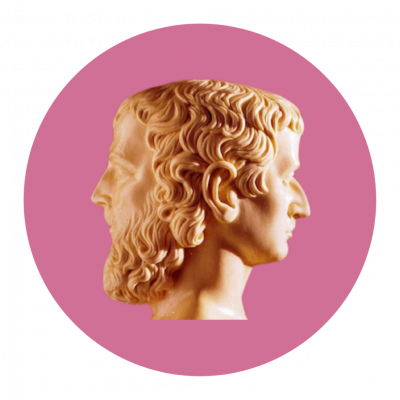 The Birth of Venus is a painting by the Italian artist Sandro Botticelli, probably made in the mid 1480s. It depicts the goddess Venus arriving at the shore after her birth, when she had emerged from the sea fully-grown.

Carried by a shell, the goddess drifts to shore in Cyprus. In Botticelli’s work, which pulls its imagery from a 15th-century poem by Agnolo Poliziano, she is propelled by the gentle breeze of Zephyr, the west wind, and balances on a giant scallop shell. A young woman, perhaps Hora of spring or one of the graces, runs to meet her, proffering a robe dotted with flowers.

Its mythological subject matter is significant as it is the first monumental female nude of a pagan goddess since the ancient world. Venus is represented as Western European.

The painting is in the Uffizi Gallery in Florence, Italy. 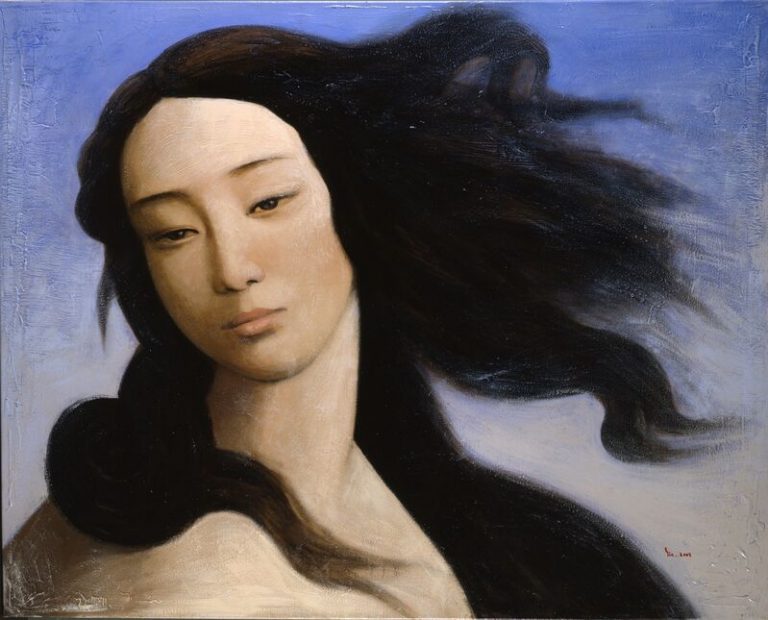 In the Yoruba cosmology of southwestern Nigeria and Benin, Oshun is the goddess, or orisha, of love, sensuality, and femininity. She is a river goddess, and one of her attributes is to bring forth sweet and fertile waters

The Birth of Oshun by Harmonia Rosales offers the benevolent and venerated Yoruba, goddess of fertility, sensuality, and prosperity. 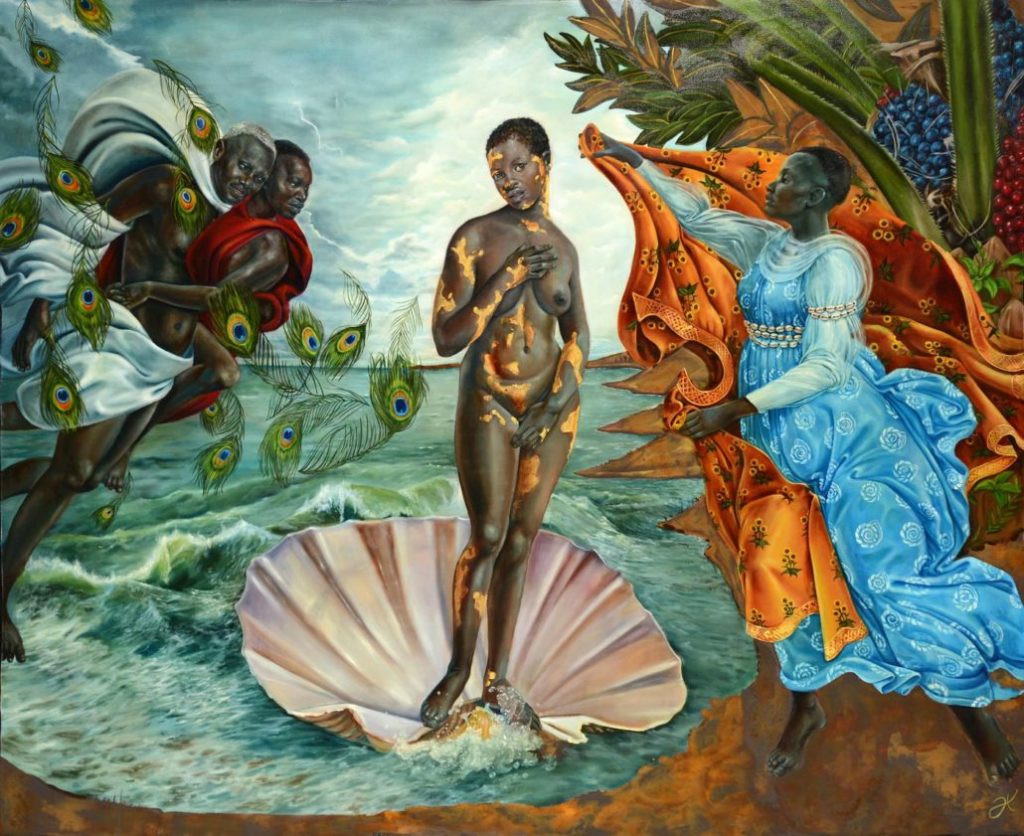 When you enter your information you will also be added to the waitlist to receive information from GlobalWoman about LUMINOUS You can unsubscribe at any time.