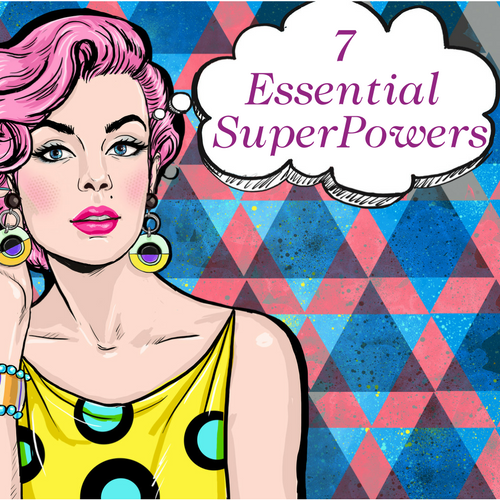 When the name GlobalWoman first came to me over ten years ago, I could never have anticipated the challenges I would face in bringing her to life.

If there’s one thing I’ve learned in that time, it’s this; choosing to deal with challenges to overcome obstacles requires certain superpowers to be activated and embodied. Otherwise known as ‘walking the GlobalWoman talk‘.  Tweet This

I took time to reflect on the somewhat circuitous journey and the seven superpowers I’ve well and truly activated.

In 2004, the name GlobalWoman appeared to me in my sleep with such crystal clear clarity that on waking there was a sense of being summoned. In a big way. Immediately I wrote the name down and stared at it in silence. I knew this was it.

Then I got on with the business of researching the availability of the domain names. The .com wasn’t available but the .com.au was. I snapped the domain name up but knew that without the .com, the ‘global’ would never be truly global.

Every few months I checked the availability of the domain and after six months or so, the .com was available. There were still challenges to overcome, yet through creative thinking and fortuitous timing I was the owner of GlobalWoman.com. Tweet This

Goddess: Fortuna. Fortuna’s themes are luck, wealth, abundance, destiny and success. Her symbols include a wheel and cornucopia. Fortuna, whose name means ‘she who brings’, is the keeper of our destiny and the guiding power behind all fortunate turns of events.

In 2005 I had the wisdom to trademark GlobalWoman®. Ten years later, the wisdom of this decision bore fruit. Tweet This

In 2006, Bunny HoopStar became GlobalWoman’s first coaching client and GlobalWoman entrepreneur. At the time Bunny was working a day job in a government department, and by night channeling her essence into the hoop. The hula hoop that is. Within three months, Bunny had ditched the day job and was working in, and on, her business full-time. Ten years on, Bunny’s business Hoop Empire is Australia’s leading hoop portal. Tweet This

Goddess: Vesta. Vesta represents the principle of focus, commitment and aspiration toward a path or goal as well as sacrifices that are made to attain that goal. She rules the ways in which we face the issues of personal integration, work, devotion, commitment, sacrifice.

Armed with the .com I got on with creating GlobalWoman. The problem was I had no detailed idea what GlobalWoman was about or what it even did. I just knew it needed to be BIG. Regardless of my lack of a vision or business plan, I engaged a graphic designer and a web developer. Given my lack of clarity, they were as confused as I was. But I soldiered on, burning through my money and their time. Eventually, the site was launched but made no sense to anyone. Least of all me. By now I was exhausted and embarrassed.

Superpower activated: Compassion. For me.

Goddess: Tara. The peaceful, compassionate White Tara gently protects and brings long life and peace. Adopted by Buddhism, Tara become the most widely revered deity in the Tibetan pantheon. In Buddhist tradition, Tara is actually much greater than a Goddess — She is a female Buddha, an enlightened one was has attained the highest wisdom, capability and compassion.

At the same time as launching the first incarnation of GlobalWoman, unbeknownst to me, I also entered my progressed dark moon phase. Thus began a 3 and 1/2 year journey into the dark. A time of endings, closings, profound loss and stagnation. I was in the dark and in despair.

I was in the wild.

I had no energy to work on the fledgling GlobalWoman business. Friends invited me to travel to the US where I hibernated for months at a time, resting and regenerating the life-force. It was during this phase that I immersed myself in the online space, learning about the digital world and how the pieces fitted together. Tweet This

Emergence from the regenerative dark moon phase into the new moon phase found me with lots of creative energy and seedlings of ideas to plant. With light comes clarity; a clear vision is forming of who GlobalWoman is and how she shows up in the world. A woman who is here to live a revolutionary, super-powered life.

As the life impulse of GlobalWoman begins to emerge more fully formed than its first incarnation, challenges arise. Thankfully, for the past two years, I have been working with a personal trainer to build inner strength and outer strength.   I feel strong. I am strong.

Goddess: Pallas Athena. Pallas Athena was born from the forehead of Jupiter as a full-grown warrior queen. She was a great tactician and strategist but also wise with insight, understanding, and problem solving.

I’d love to hear from you

Every step has been right; every step has brought me here, super-powered UP. I’d love to hear from you – leave a comment below as to the superpowers you’ve activated on your journey.