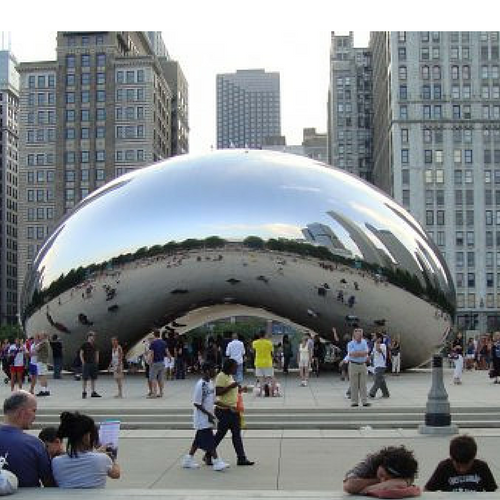 Chicago: a GlobalWoman Kind of Town

I wasn’t looking for love when I arrived

In fact I was on the run from heartache and fully focussed on recovery mode. In hindsight this love affair was inevitable and yet at the time took me by surprise. Other than a friend telling me that Chicago was a must see American city, I had no ideas or expectations.

Close to seven years later I still remember the details of that afternoon so clearly. It was a hot humid Sunday in early August, with a brilliant blue sky. I had flown in from LA that morning, completed hotel check-in just off Michigan Ave and the buzzing downtown street scene was calling me

As I walked out onto Michigan Avenue I looked up and burst into tears. There I stood crying on a crowded street with people bustling all around me. I went from having no idea to what I was doing in Chicago to within a moment, falling in love. Being GlobalWoman and all, I had travelled extensively and visited the world’s great cities. My decided favourites were NYC, Venice, Paris, Rome, Hong Kong and Mumbai.

Until I saw Chicago’s skyline.

From that moment on my heart was well and truly intrigued and enchanted by Chicago. In the midst of my progressed dark moon phase, Chicago is where I reconnected with possibility and felt the inkling of how to move forward.

Where I felt the power of planning and the promise of potential.

For six weeks, I walked until I got lost and to eventually find myself. From Downtown, to Lake-Shore, to River North to The Loop, Wrigley Park, Old Town, Lincoln Park. I walked every inch, covering as much history as I could and connecting to the soulfulness of her people.

Each day my heart opened more to expansion as opposed to contracting.

I studied up on the political, cultural and social history of Chicago. I learned that after the great fire of 1871, serious questions were asked about how to build a metropolis that was forward thinking. In 1909, a group of leading architects and business people came together to co-ordinate Chicago’s reinvention with what is known as the Plan of Chicago.

Daniel Burnham (think Flatiron Building NYC) was one of Chicago’s leading architects of the time, and one of two co-authors of the plan. The following quote is attributed to him:

Make no little plans; they have no magic to stir men`s blood and probably themselves will not be realized. Make big plans; aim high in hope and work, remembering that a noble, logical diagram once recorded will never die, but long after we are gone will be a living thing, asserting itself with ever-growing insistency. Remember that our sons and grandsons are going to do things that would stagger us.
Let your watchword be order and your beacon beauty.

Chicago in the 21st Century is proof of the ever-growing insistency of order and beauty. A city that embodies the essence of GlobalWoman – bold, original and empowered. Tweet This

My invitation to you GlobalWoman is to dare to aim high in heart, hope and work to find a life that is yours. Make plans that invoke order and beauty.

GlobalWoman’s 7 must dos in Chicago

I landed in Chicago in the heat of the GFC. It was a rare astrological combination of four-five star hotels being cheap and the Australian dollar, for a brief moment in time, being worth more than the greenback. All of which made Chicago an even more delightful experience.

I’d love to hear from you

Have you visited Chicago? Leave a comment below as to your favourite experience or your recommendations of this great city.